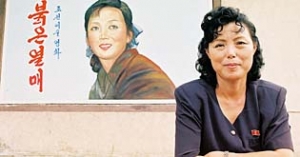 This film is about several people for whom the cinema is their life. One of
them is Han Jong Sil from North Korea. She enjoys life – in spite of being
caught between propaganda, her own desires and crop yields – and hopes
to improve people′s lives with her films. Penny Tefertiller from Wyoming in
the USA has also devoted her life to the community by providing the young
and the lonely with a stopping off point. Her vision of cinema contains a
similarly missionary element to that of Han Jong Sil in North Korea; it is a
dream informed by selfless passion and benevolence. The hale and hearty,
self-confident Lassane and his comrades-in-arms Luc and Zakaria from
Ouagadougou are trying with all their might to show films in Burkina Faso,
one of the world′s poorest countries. Theirs is a risky business that causes
them to neglect their families and propels them into financial adventure.
And all so that they can breathe new life into a run-down open air cinema.
Things are going swimmingly for Anup from India.

His tent cinema is fit to bursting when he screens popular films from Maharashtra. His habit of blessing the rolls of film at the temple and his knack for choosing the best titles have made him uncrowned king of the region′s travelling cinema. And yet the real realm of the imagination lies outside the cinema halls, where a common bond of dreams unites the heroes of this documentary. Their search for a little bit of happiness reminds us that the best stories are not only found on the big screen.