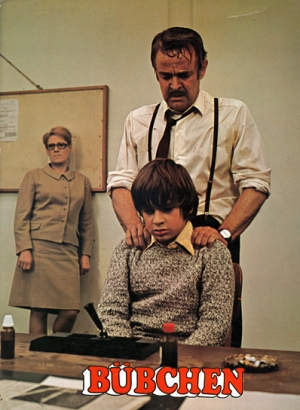 Roland Klick′s first feature film tells the story of a crime without explaining it in a criminological or psychological way: Ten year old Achim suffocates his younger sister Katrin with a plastic bag, apparently without any motive. Then Achim hides the corpse on a rubbish dump and tries to make Otto look guilty. Otto is in love with the neighbour′s daughter Monika, who should have watched for Katrin. When Achim′s father discovers the deed, he removes all traces– again without any discernable motive. Now the family tries to find back to "normality".

After mostly negative reactions at the film′s premiere, "Bübchen" was released two years later, in 1969, under the new title "Der kleine Vampir".