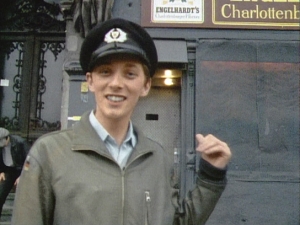 There is Blixa Bargeld, skinny as a rake, getting people drunk in the bar 'Risiko', and an earnest-looking Nick Cave collecting 'German Gothic' on a wall of his room in a Berlin flat. Cool Gudrun Gut stands outside 'Dschungel' counting the number of clubs you can go to at two in the morning, and 'Tödliche Doris' sings at a most inhospitable Potsdamer Platz. And somewhere in between the Wall and firewalls, the old buildings and the new, Mania D and Westbam, is Mark Reeder from Manchester. Drawn by his love of off-the-wall urban electronic music this British musician, label-maker and military fetishist came to Berlin at the end of seventies, where apparently – and fortunately! – everything he experienced was filmed.

With its copious images and audio material compiled by Jörg A. Hoppe, Klaus Maeck and Heiko Lange, "B-Movie: Lust and Sound in West-Berlin" is a documentary and a declaration of love rolled into one. A warm-yet-wrecked reencounter with themselves for all those who were a part of it. And downright mind-expanding for all those who have arrived since and claim to know where Berlin’s bear got down, or even dare assert that things only began to swing in 1990.