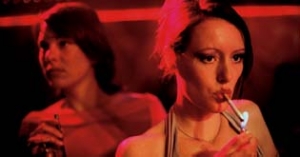 The young student Maria leads a life marked by a need to be close to someone and an excess of sex, tablets and alcohol. Her greatest fear is to be alone, which she attempts to combat by means of an affair with an older man named Wolfgang and numerous one-night-stands. Maria is what you might call "borderline": she has a problem with boundaries.

One morning a young student called Jan shows up at the university library where Maria works. The two of them hit it off, and Maria senses that this nascent relationship just might be her very first sincere and honest love. A desire to break with her former life begins to grow in her, but she doesn’t know how to go about it. Maria is afraid of failing. She carefully tries to conceal her past from Jan, but fails to realize that this will only lead to a major catastrophe.

In his impressive feature film debut, Thomas Durchschlag examines the self-destructive power of depression, fear and loneliness. The film came about within the framework of the Six-Pack initiative, a support programme for young talent whereby the Filmstiftung Nordrhein-Westfalen and the broadcaster WDR share the production costs of a debut film.