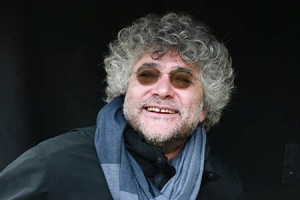 Yilmaz Arslan was born in Kazanli, Turkey, in 1968 and from 1975 grew up in Germany. After his graduation from school, he shot his first fiction film "Langer Gang" about a group of young people in a rehab center for disabled adolescents, who are looking for love. The film became a festival hit and won awards at film festivals in San Sebastian (Spain), Bergamo (Italy) and Saarbrücken (Germany). In addition to that, "Langer Gang" received a nomination for the Deutscher Filmpreis in the Best Picture category.

In 1998, "Yara" (DE/TR/CH) was released, Arslan's next feature film, which, like "Langer Gang", he wrote, produced and directed. "Yara" tells the story of a 16-year-old German-Turkish girl, who gets sent to Turkey by her father against her will. The film received mixed reviews but won prizes in Saarbrücken and Istanbul.

His short film "Angst isst Seele auf" (2002) is told from the perspective of a black actor starring in a stage production of Fassbinder's "Angst essen Seele auf" ("Fear Eats the Soul"), who becomes a victim of racially-motivated hate crime on his way to work.

Arslan's next feature film, "Fratricide - Brudermord" (DE/LU/FR 2005) about two Kurdish brothers in Germany, received acclaim from critics and was successful at festivals, winning the Silver Leopard as well as a Special Mention of the Ecumenical Jury at the Locarno International Film Festival.

In addition to filmmaking, Arslan taught at several Goethe Institutes and worked as consultant for the Medien- und Filmgesellschaft Baden-Württemberg (MFG), which promotes and funds film and media projects in the state of Baden-Württemberg.

After "Fratricide - Brudermord", Arslan took an extensive break from filmmaking, returning to it only in 2015/16, when he started working on a screenplay of an adaptation of the novel "Jacob beschließt zu lieben" together with Suzanne Pradel. In 2016, he founded the production company MaxMa Film in Mannheim with which he produced his next feature film "Sandstern", a semi-autobiographical coming-of-age drama about a Turkish boy, who is forced to move to Germany to live with his parents he hardly knows. After premiering at the Hof International Film Festival, "Sandstern" was released in German cinemas in late 2018.