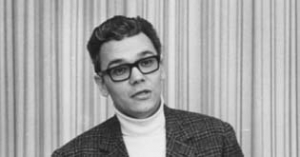 Walter Heynowski, born November 20, 1927, in Ingolstadt, served as a flakhelfer in World War II, then became a Wehrmacht soldier. After being captured by American soldiers he was detained in Bad Kreuznach. When the war ended and he was released from war captivity, Heynowski started to study Catholic theology but changed to economics and worked as a trainee, then editor for the left-wing youth magazine "Die Zukunft" in Reutlingen. In 1948, he moved to Berlin and at first worked as an editor for "Berliner Zeitung". From 1949 on, he was the head editor of the satirical magazine "Frischer Wind" that was renamed to "Eulenspiegel" in 1953. Furthermore, Heynowski established the "Eulenspiegel-Buchverlag" in 1954. From 1956 on, he worked for Deutscher Fernsehfunk, at first as an author, director, and editorial head of the TV series "Zeitgezeichnet", then, until 1963, as programme director and deputy intendant.

From 1959 on, Heynowski made documentary films that mainly focused on the continued existence of the National Socialist past, in particular in West Germany. In "Aktion J" (1961), for instance, he disclosed that the West German state secretary of the Federal Republic of Germany Joseph Maria Globke had been jointly responsible for the Holocaust. From 1963 to 1969, Heynowski worked as an author and director for the DEFA studio for documentary films where he met Gerhard Scheumann in 1965, and from then on collaborated closely with him. Within 25 years, they made more than 70 documentary films together. Most films have a strongly ideological character and despite their commendable discussion of important topics and accurate research, their films were often marked by political polemics. The capitalist West and its "imperialism" always stood in the centre of their criticism – in contrast to the salutary socialism of the Soviet Union and the German Democratic Republic. Heynowski later confessed: "I had been a cold warrior."

Heynowski and Scheumann celebrated international success with "Der lachende Mann" (1966), a conversation with the unscrupulous mercenary "Kongo-Müller" who thought he was talking to West German journalists in this revealing interview. In the four-part movie series "Piloten im Pyjama" (1968), the documentary filmmakers portrayed American pilots in Vietnamese war captivity and interviewed them about their assignments and missions, about the conditions of their detention, and about their world view.

In 1969, Heynowski and Scheumann set up their independent studio "H & S", that also became their brand name, and worked with a fixed crew of employees. But in 1982, the studio was closed after Gerhard Scheumann criticised the SED in a speech, and was re-integrated into the DEFA studio for documentary films. During their independent years, Heynowski and Scheumann had made films about Chile and the putsch by General Pinochet (for instance "Krieg der Mumien", 1974, and "El Golpe Blanco – Der weiße Putsch", 1975), about the Vietnam war ("Die Teufelsinsel", 1976), and about Kampuchea and the regime of the Khmer Rouge ("Die Angkar", 1981).

With the film "Die Generale" (1986) about former NATO commanders, Heynowski and Scheumann were permitted to use their own brand "H & S" again. One of their most successful film in the following years was "Kamerad Krüger" (1988), a portrait about the former SS Sturmbannführer Walter Krüger that showed the continued existence of the National Socialist mindset in the Federal Republic of Germany. For this film, the directors again pretended to be West German journalists. Further films about the National Socialist past include "Die Lüge und der Tod" (1988) and "Der Mann an der Rampe" (1989). After the end of DEFA in 1991, Heynowski's and Scheumann's workshop was also closed down.

Walter Heynowski has been a member of Akademie der Künste of the German Democratic Republic and won multiple national awards. From 1967 to 1990, he was also a board member of Verband der Film- und Fernsehschaffenden in the GDR. In 2007, he published his memoirs under the title "Der Film meines Lebens. Zerschossene Jugend". Walter Heynowski is living in Berlin.