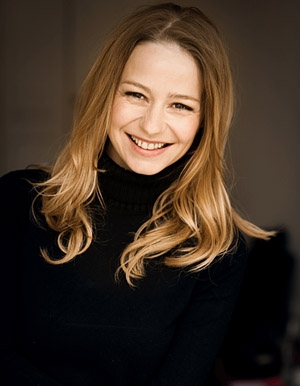 Theresa Scholze was born in Schmölln on February 11, 1980. She is the daughter of actors Jürgen Mai and Sabine Scholze and the younger sister of actress Caroline Scholze. Her first TV roles date back to her teens, when she featured in the youth-oriented series "Mensch, Pia!" (1996) as the main character Pia's roommate. After graduating from high school, she went on to study at the University of Music and Theatre 'Felix Mendelssohn Bartholdy' Leipzig. While studying she kept acting in TV productions.

A small part in "Julietta – Es ist nicht wie du denkst" ("Julietta", 2001), a modern adaptation of Heinrich von Kleist's novella "Die Marquise von O…", marked her debut on the big screen. A wider audience got to know her through the crime series "Der letzte Zeuge" ("The Last Witness") in which, from 1998 to 2006, she played the daughter of medical examiner Kolmaar (Ulrich Mühe). She worked in theater productions as well and took to the stage at the Schauspiel Leipzig and the Hans-Otto-Theater Potsdam.

The main body of her work, however, consisted of made-for-TV films and TV series like "Wolffs Revier", "Unser Charly", "Küstenwache" and "SOKO Leipzig" where she featured in guest roles. In "Zwei Engel für Amor" (2006), a pre prime time series nominated for a Grimm-Preis, she starred as a heavenly messenger of love on earth. Also in 2006, Scholze was cast for the award-winning big screen production "Vier Fenster" ("Four Windows") and featured as a daughter of a seemingly average family that is, however, defined by masquerading and self-deception.

In the thriller "Fleisch" (2007, TV), a remake of the Rainer Erler classic, she starred as a wife who loses her husband to organ traffickers. From 2009 to 2010, she had the title role in the telenovela "Alisa – Folge deinem Herzen" ("Alisa – Follow Your Heart"). Scholze played another lead in the drama "Emilie Richards – Denk nur an uns beide" (2010, TV) where she portrayed a nanny who supports a single father in a custody battle. In the TV comedy "Mann kann, Frau erst recht" (2012), directed by Florian Gärtner, she featured as a prospective journalist who cross-dresses in order to infiltrate the editing staff of a men's magazine. The following years saw her featuring as a guest in various series such as "Die Chefin", "Heldt" and "Herzensbrecher".

In January 2015, the drama "Lichtgestalten" ("Icons Of Light") premiered in the competition of the Filmfestival Max Ophüls Preis (theatrical release: January 2016).The story is about a young Berlin couple who want to erase their hitherto existing lives in order to start all over again. April 2015 then saw the premiere of "Marcel über den Dächern" at the Achtung Berlin Festival; a comedy about four couples who experience a turbulent night in Berlin.