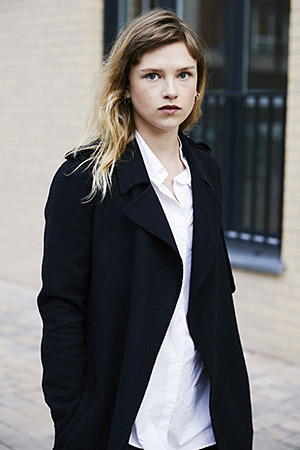 Sinje Irslinger, born on 30 January 1996, came into contact with the media world at an early age through her mother, a make-up artist, and her father, a TV journalist. During her time at grammar school, she completed acting and staging courses at the Comedia Theater in Cologne in 2010/2011. During the performance of her group's final play, Irslinger was discovered by an acting agent - and shortly afterwards was given the leading role of an abuse victim in the multiple award-winning short film "Guck woanders hin" (2011).

For her role in the TV movie "Es ist alles in Ordnung" ("Everything Is Alright"), about domestic violence in a well-off middle class family, she was awarded the German Television Award 2014. She also had other important TV roles in the drama "Die kalte Wahrheit" ("The Cold Truth", 2014), as the daughter of a murder victim in the "Tatort" episode "Hundstage" (2016) and as a high school graduate whose parents are in a crisis after she has moved out, in "Eltern allein zu Haus - Die Winters" (2016). From 2015 to 2017 Irslinger played a leading role in the mystery series "Armans Geheimnis", about a clique of very contrasting young people who discover psychic abilities in themselves. In 2016/2017 she was a member of the ensemble of the dramedy series "Der Lehrer" in the fourth and fifth season. From 2016 to 2019 she also had a recurring role in the crime series "Soko Leipzig", as the daughter of crime commissioner Tom Kowalski (Steffen Schroeder).

Irslinger appeared on the big screen as best friend of a Youtuber in the ensemble of the modern and much-praised Cyrano-de-Bergerac adaptation "Das schönste Mädchen der Welt" ("The Most Beautiful Girl in the World", 2018). After that she took on guest roles in various series.

Sinje Irslinger had her first leading role on the big screen in the tragicomedy "Gott, du kannst ein Arsch sein!" ("God, You're Such a Prick", 2020), in which she played a schoolgirl suffering from cancer, who sets off on an eventful journey to Paris with a chance acquaintance (Max Hubacher).