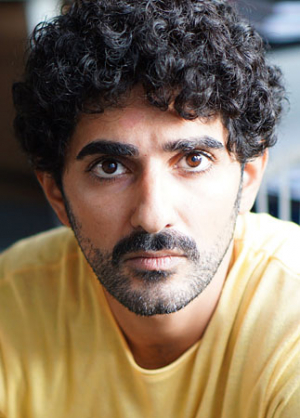 Reza Brojerdi was born in 1983 in Tehran, Iran. From the age of two he grew up in Germany, first in Melle in Lower Saxony, later in Bielefeld. In 2006 he moved to Berlin, where he took acting lessons with Jürgen Nafti in 2009. In the same year he was seen in short films and in a first, small guest role in two episodes of the series "Zeit der Entscheidung - Die Soap Deiner Wahl".

From 2011 Brojerdi appeared more regularly in television productions, for example in individual episodes of "Notruf Hafenkante" and "Der Draufgänger"; in the "Tatort" episode "Fette Hunde" (2012) he played an Afghan drug courier who gets murdered in front of his sister's eyes. In the six-part series "Frauenherzen" (2015), Brojerdi played a central role as an ambitious hairdresser; in four episodes of the US series "Homeland" (2015), he impersonated an IS terrorist living in Berlin. He also played supporting roles in the love comedies "Einfach Rosa: Verliebt, Verlobt, Verboten" (2016) and "Treffen sich zwei" (2016, TV).

In 2017 Brojerdi starred on the big screen in two ambitious low-budget productions: In the political science fiction thriller "Immigration Game" he played a smaller role as a hunted Iranian refugee; in Adolfo Kolmerer's experimental science fiction drama "Schneeflöckchen" ("Snowflake"), he had a leading role as one of two murderers who suddenly hold the script of their own film in their hands. For this role he was awarded Best Actor at the Horrible Imaginings Film Festival in San Diego (USA) together with his co-star Erkan Acar. Under Acar's direction he also belonged in a small role to the ensemble of the comedy "Ronny & Klaid" (2018).

Daniel Harrich's investigative TV drama "Saat des Terrors" (2018), about the entanglements of Western secret services that actively support terrorists, attracted much attention. Brojerdi played a central role as the Pakistani translator of a German BND agent (Christiane Paul) in Islamabad. Again directed by Adolfo Kolmerer, Brojerdi played a leading role in the movie "Abikalypse", which was released in summer 2019. The film was about four school outsiders who want to show their classmates what they're truly made of by organising a huge graduation party.

More serious was the historical drama "Morgen sind wir frei" ("Tomorrow We Are Free"), with Brojerdi in the leading role of an Iranian dissident living in the GDR, who returns to his homeland after the fall of the Shah of Persia in 1979, but gets caught up in the maelstrom of the Islamic Revolution there.