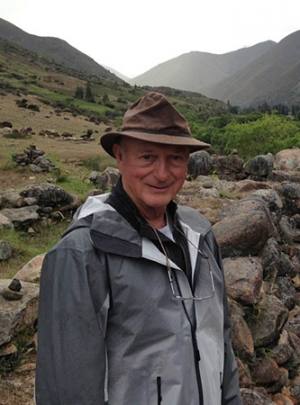 Percy Adlon was born in 1935 in Munich and studied Art, Theatre and German Literature at the Ludwig-Maximilians-University in Munich. After three years as a stage actor, he worked as a narrator and editor of a literature series for radio and television.

In 1970, he started his film work for television and made more than 150 documentaries about art and the human condition. His first feature film, "Céleste" (1981), drew international attention. His film "Bagdad Café" ("Out of Rosenheim",1987) was a great success, winning the Best Film Award in Rio de Janeiro and two Césars.

Together with his wife, Eleonore Adlon, he has written and produced numerous films, including: "Sugarbaby" (1984), "Rosalie Goes Shopping" (1989), "Salmonberries" (1991) winner of the Grand Prix des Amériques in Montreal, and the TV-movie "The Glamorous World of the Adlon Hotel" (1997). A series of 22 short films without words, "Die Strausskiste" (2000), is among the Adlon's latest works.