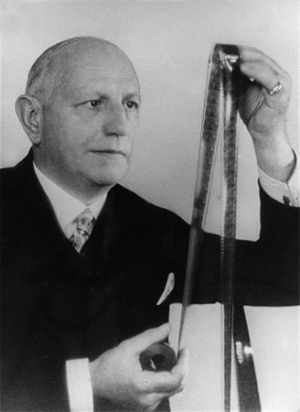 Oskar Eduard Messter was born November 21, 1866, in Berlin as the son of optician Eduard Gustav Colmar Messter and his wife Marie Wilhelmine, born Rautenburg. After finishing school, he attended a three-year apprenticeship in his father's company that also included a traineeship at the optical-mechanical Anstalt Paul Waechter in Friedenau near Berlin. From 1887 to 1888, Messter did his military service as a one-year volunteer but still participated in military drills until 1896. Furthermore, he became a second lieutenant in the reserve in 1892.

From 1891 on, Messter was a partner in his father's company. At the time, the Ed. Messter company mainly built microscopes for the testing for trichinae and for medical purposes but also optical devices for carnies like projection lenses for magic lantern screenings.

The news of the success of the first cinematographic screenings by the Lumière brothers aroused Oskar Messter's interest in the new technology. After several failed attempts, he designed his first projector on his own and tentatively screened kinetoscope films. On June 15, 1896, he delivered an already improved model with a five-part Geneva drive to the Russian carny Rogulin. This sale is generally considered to be the starting point of the German film industry because Messter from then on manufactured projectors in quick succession. From October 1896 on, Messter also offered self-designed cameras with Geneva drives and started to make films in order to be able to deliver programmes to the buyers of his devices.

On September 21, 1896, Messter also took over a screening hall in the "Wilhelmshallen" restaurant. In this establishment that Messter soon renamed to "Biorama" cinematographic screenings had been done already since April 1896. From September on, these screenings were continued with Messter's devices and programmes and were accompanied by phonograph music. On May 4, 1897, he made the first film shots of Emperor Wilhelm II during the launching of a ship in Stettin. This film marked the beginning of Messter's longtime film shooting for the Emperor's court and the navy.


In 1900, Oskar Messter outsourced the film business from the parent company Ed. Messter that was continued as a specialist store for optics and photo products. With commercial judge Paul Kühne as a partner, Messter set up three different companies on January 7, 1901 that were all headed by Messter and Kühne.

On August 29, 1903, Messter for the first time performed with "singing and speaking photographs" at Berlin's Apollo-Theater and heralded a new stage in the development of the early German cinematography. Soon, the short films were shown under the term "sound film" and became a huge success. Messter distributed his devices for sound and images under the name "Biophon" and set up special "Biophon" theatres in several cities.

When his company suffered a crisis, Messter and Kühne tried to mobilise new capital by setting up a stock corporation. Eventually, the Messter companies were sold to Neue Photographische Gesellschaft AG, a manufacturer of film and photo material that hoped to get into the film business with this acquisition. However, the attachment to NPG soon was marked by tensions and did not yield the expected results. In November 1911, all contracts between Messter and NPG were cancelled. Later, NPG went bankrupt.

Under the direction of Leo Mandl who had transferred from NPG to Messter, the company set up a new organization on its own. After a lot of restructuring, the Messter group became one of the few German companies that were completely vertically organized.

When World War I broke out in August 1914, Messter-Atelier at first stopped working. But the production soon resumed and Messter-Film profited from the movie boom on account of the war. In September 1914, Messter presented "Dokumente zum Weltkrieg", and later produced "Messter-Woche" with extensive war reports on a regular basis. In early 1915, a new, military area of operation opened up for the film technician Messter. Inspired by a friend, an air force pilot, who wanted to have a camera for aerial shots, Messter build the "Reihenbildner", a camera that was able to deliver suitable topographical pictures for aerial reconnaissance.


Besides his technical film work that made it possible to procure strategic assignments for his companies, Messter still had the time to support the concerns of the film industry as the president of the "Verband zur Wahrung gemeinsamer Interessen der Kinematographie und verwandter Branchen". In August 1916, Messter published his memorandum "Der Film als politisches Werbemittel". In it, he pointed out the lack of war propaganda in favour of Germany to the government and criticized the censoring and taxation of German film producers.

In his memorandum, Messter demanded further national subsidies to distribute films in favour of Germany for a low price or even free of charge. Messter's paper formulated intentions and desires to connect the film business with politics, a connection that others had already started to implement behind the scenes. In late 1917, the German public was surprised by the setting up of Universum Film AG (Ufa) that combined the German affiliates of Nordisk, the Projektions-AG Union, May Film GbmH, and the Messter group.

After he had sold his company to Ufa, Messter's career that had led him to become one of the most influential German film producers was thrown off course. His next enterprises proceeded rather unspectacularly except for his participation – in several constellations of participating companies – in some successful productions like "Drei Tage Mittelarrest" und "Mädchen In Uniform".

From a present-day perspective, Messter's film-historical research from 1918 on is most important. From about 1922 on, he worked on his memories and started an extensive research for several years and build up an extensive archive of sources that has survived for most part and today is placed in his heritage at Bundesarchiv. He corresponded with film pioneers in Germany, France, England, and in the USA, tracked down former employees and customers and made them write down their experiences and knowledge. Messter also started to build up a film-historic collection of devices and film that partly migrated to the collection of Deutsches Museum in Munich in 1932.

In 1939, Messter finally retreated to his house at Tegernsee with his second wife Antonie, born König (1898 to 1978) whom he had married in 1928 after his divorce from his first wife Margarete, born Wittmann. Oskar Messter died on December 6, 1943, shortly after his 77th birthday.