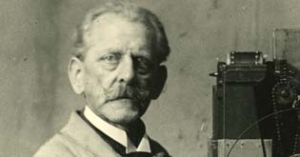 Max Skladanowsky was born in 1863 and died in 1939 in Berlin. A film pioneer, he experimented in photography together with his father Carl and brother Emil. In 1892, he constructed a camera that could capture moving images. In 1885, he introduced the Bioscop double projector, followed by another new camera and single projector in 1896. He started his own business, Berliner Camerawerk, and later the production and distribution company "Projektion fuer alle" in 1897, hoping to successfully commercialize his early cinematic inventions, however the growing competition from the rapidly developing film industry led to the ruin of his small company.

However, his unsurpassed significance as inventor of Germany"s first film camera and projector and his historical contributions to the entire film industry remain. His other films include, among others: "Wintergartenprogramm" (1895), "Nicht mehr allein" (1896), "Am Bollwerk in Stettin" (1897), "Eine Fliegenjagd oder Die Rache der Frau Schultze" (1905), "Die moderne Jungfrau von Orleans" (1905), and "Die Erfindung der Kinematographie im Jahre 1895 in Berlin" (1927).