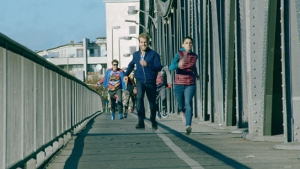 Mathis Landwehr was born in Stuttgart on May 30 1980. In 2003, he took an acting class at the Arturo Schauspielschule in Cologne, and in subsequent years, he attended several acting courses and workshops. Moreover, he trained in martial arts and fight choreography. After first appearances in short films, Landwehr began to work regularly in TV and film productions in 2005. He had his first leading role in the action movie "Kampfansage - Der letzte Schüler" ("The Challenge", 2005), for which he also performed many stunts. As stuntman, he worked on big-budget productions like "V for Vendetta" (US/DE 2005) and "Speed Racer" (US/DE 2008). He went on to guest-star in a string of TV shows and was the lead of the action series "Lasko – Die Faust Gottes" ("Lasko - The Fist of God", 2009-2010), for which he received a nomination for "Best Fight" (together with Eskindi Tesfay) at the 2010 Taurus World Stunt Awards. From 2013 until 2014, Landwehr also was regular cast member on the TV series "Heiter bis tödlich - Akte Ex".

Already in 2011, Landwehr and Sascha Girndt co-founded the production company Roundhousefilm GmBH with a focus on independent genre cinema. The company’ first feature-length production was "Immigration Game" (2017), starring Landwehr as the male lead. The film is set in a dystopian Germany, in which refugees have to fight for their citizenship and their survival on a TV show. "Immigration Game" won Roundhousefilm and director Krystof Zlatnik the New Voice on the Edge Award at the Boston Science Fiction Film Festival, and was released in Germany in July 2017.