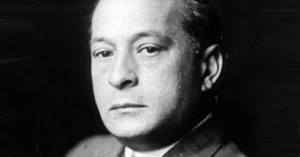 Lupu Pick was born in Jassy, Romania on January 2nd 1886. From the age of eleven on, he grew up in Berlin. Already in elementary school, he was member of a theatre group and gave violin conserts. After graduation, he made an apprenticeship as a salesman, but at the same time took acting lessons. In 1909, he joined th ensemble of the Schillertheater in Altona. During a performance in Flensburg, he met actress Edith Posca, whom he married three years later.

In 1913, he was hired by Georg Altman for the Kleine Theater in Berlin. He stayed for five years, and among his biggest successes were his parts in "Der hundertjährige Greis oder Die Familie Rüstig", Grabbe"s "Scherz, Satire, Ironie und tiefere Bedeutung" and Schnitzler"s "Liebelei". After WWI, he only sporadically appeared on the stage, and in 1930, he retired from theatre acting.

From 1915 on, Pick also worked as a creen actor. After his debut in Richard Oswald"s "Und wandern sollst Du ruhelos…", he not only became a fixture in Oswald"s following films, but also a regular in films by Conrad Veidt and Reinhold Schünzel.

In 1918, he was one of the founders of the Rex-Film GmbH, and in the same year, he became its managing director. Starting out as a director, Pick made entertainment fare like the crime caper "Mr. Wu", but also co-helmed the socio-political drama "Tötet nicht mehr!".

1920 saw Pick"s first collaboration with author Carl Mayer on "Der Dummkopf". Their second feature film was "Scherben", which is today considered the archetypical German intimate drama. The gothic tale "Grausige Nächte" was followed by the acclaimed tragedy "Sylvester", Pick"s last Film based on a screenplay by Mayer. Pick continued to direct films for Rex-Film – which was now a stock company –, including "Das Haus der Lüge", "Das Panzergewölbe" and "Eine Nacht in London".

Apart from working as producer, author and director, he sometimes still worked as an actor on other films and was also heavily involved in film politics. In 1928, he founded the Lupu Pick Film-Produktions-GmbH. Based on an expose by Abel Gance, he and Willy Haas scripted the period piece "Napoleon auf St. Helena", which he also directed. The musical comedy "Gassenhauer", featuring Ernst Busch, Hans Deppe and Wolfgang Staudte, was Pick"s first only foray into sound cinema and also marked his last work as director.

On March 7 1931, Lupu Pick died unexpectedly after suffering from gastric trouble. Widowed, his wife Edith Posca took her own life in the night of June 6 1931.