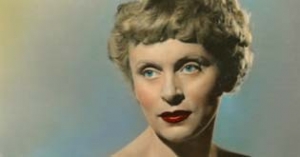 Born in Vienna on October 31, 1910, Luise Aloisia Elisabeth Ullrich attended a girls school. After graduating at the age of 14, she was trained as an actress at the Academy of Music and Performing Arts Vienna. She made her stage debut with the role of "Mariechen" in a staging of Sudermann's "Heimat" at the Volksbühne Vienna in 1926, and immediately got the audience's attention. In 1931, she moved onto the Volksbühne Berlin, followed by engagements at the Berlin state theatre.

Her acclaimed stage performances, for example in Richard Billinger's "Rauhnacht", arose the interest of filmmakers: In 1932, Luise Ullrich made her film debut in Ufa-produced short films commemorating the 100th anniversary of Goethe's death. In the same year, she had her first role in a full length feature in Luis Trenker's "Der Rebell". Her portrayal of the poor "Wiener Madl" Mizzi in Max Ophüls" adaptation of Arthur Schnitzler's "Liebelei" has earned her much attention. Her natural performance and youthful charm as the naïve maid in Erich Waschneck's "Regine" made her first leading role also her breakthrough.

In the following years, she enjoyed box-office success with Carl Hoffmann's "Das Einmaleins der Liebe" (1935), Wolfgang Liebeneiner's "Versprich mir nichts!" (1937) or Herbert Selpin's "Ich liebe dich" (1938), and she became one of the most popular movie stars of the time. In 1941, she was named Best Actress at the Venice Film Festival for her performance in the melodrama "Annelie" (D.: Josef von Baky). After WW II, it took four years until Luise Ullrich again appeared in a motion picture: In Harald Braun's melodrama "Nachtwache" ("Keepers of the Night"), she plays a female doctor in conflict with her Christian beliefs. The previous absence from the screen didn't do her popularity any harm. In the 1950s, she successfully portrayed the capable, archetypal woman of the post-war area. The then popular role-model in movies was a mother on whom the whole family depended, who had a good dose of self-confidence and a dry sense of disarming humour, like for example in Paul Verhoeven's "Vergiß die Liebe nicht" (1953), Helmut Weiß' "Die liebe Familie" (1957) or Peter Beauvais' "Ist Mama nicht fabelhaft?" (1958).

At the beginning of the 1960s, Luise Ullrich retreated more and more from the film business. Every now and then, she appeared on TV, for example in the series "Zirkus meines Lebens" (1968) and in Michael Verhoeven's "Dr. Meinhardts trauriges Ende" (1970). In 1972, she memorably portrayed the determined grandmother in Rainer Werner Fassbinder's mini-series "Acht Stunden sind kein Tag".

After having written several novels during her career, Ullrich published her autobiography "Komm auf die Schaukel, Luise" in 1973. The same year, she was awarded the Order of Merit of the Federal Republic of Germany. In 1979 she received the honorary award at the German Film Awards for her "longstanding and outstanding work in German film". Until the early 1980s, Luise Ullrich repeatedly appeared on stage in theatre productions. Her last roles in front of a camera were in 1981 in Axel von Ambesser's "Bring's mir bei, Céline!" alongside Bruni Löbel as well as in 1984 in an episode of the popular series "Geschichten aus der Heimat".