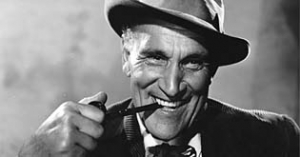 Luis Trenker was born in St. Ulrich (South Tyrol) on October 4th 1892. After finishing school, Trenker began an apprenticeship as an engineer, attended the Bau- und Kunsthandwerkschule in Bozen till 1905, and then visited the k.u.k. school in Innsbruck. During school holidays, he worked as a mountain guide and ski instructor. From 1912 to 1914, he studied architecture in Vienna, and from 1914 to 1918 her served as a soldier in WWI. After the war, Trenker unsuccessfully tried himself as a business entrepreneur, finally resuming his studies of architecture in 1920.

Following his graduation, he worked as an architect from 1922 to 1927. During the 1923 production of "Der Berg des Schicksals", director Arnold Fanck hired Trenker as an advisor and finally also cast him as an actor. After that, Trenker also performed in the next films "Der heilige Berg" and "Der große Sprung", in which the former dancer Leni Riefenstahl was his screen partner.

In 1928, Trenker and his wife relocated to Berlin. Nevertheless, mountains, snow and ice remained the preferred territory for the professional actor Trenker, who played in the historic mountaineer epic "Der Kampf ums Matterhorn" and in "Der Ruf des Nordens", which follows an expedition to the North Pole. As a director, he picked themes from his Tyrol background.

Following the war dramas "Berge in Flammen" and "Der Rebell", Trenker became a co-founder of the directors" department of the Nationalsozialistische Betriebsorganisation (NSBO), one of the many organisations that marked the takeover of the film industry by the Nazis. Thanks to the help of Universal head Carl Laemmle, Trenker was able to produce English-language versions of his first two films. The stories of his next films, "Der verlorene Sohn" and "Der Kaiser von Klaifornien", were partly or wholly set in America. After producing multi-language-versions of the drama "Condoterri" in Italy, Trenker returned to the "Bergfilm", exploring the genre to comic or dramatic effect.

Being a practicing catholic and Tyrolean patriot, Trenker saw no future for his work in Nazi Germany. In 1942, he moved to Italy and continued to live in Venice and Rome well after the end of WWII. In 1949, he returned to Tyrol, and started to shoot short films about the mountains and their inhabitants through his Munich-based production company Luis Trenker Film GmbH. His last three feature films were "Flucht in die Dolomiten", "Von der Liebe besiegt" and "Wetterleuchten um Maria".

Trenker, who also became an extremely successful novelist, continued to perform as in German and Austrian personality programmes like "Luis Trenker erzählt". Being a celebrity, he also took small acting parts and often appeared as an expert on everything alpine.