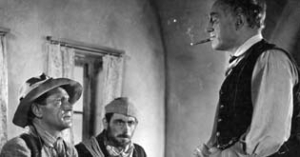 Mountaineers Carrel and Whymper decide to climb the famous Matterhorn together. But an intrigue disrupts their friendship, and finally they lead two competing expeditions: Carrel starts from the Italian side, while Whymper tries himself on the Suisse side. Whymper′s team is the first one to reach the summit, causing a frustrated Carrel to abort his expedition. During the descent, Whymper′s teammates fall to their death, and sole survivor Whymper himself is accused of cutting the rope. Amidst a heavy snow storm, Carrel climbs the mountain and eventually finds the rope, which is fully intact. He returns with the evidence and testifies in court, thereby saving Whymper. The two man become friends again.