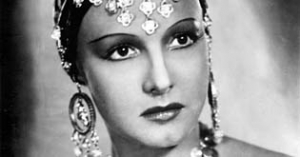 La Jana, born as Henriette Margarethe Hiebel in Vienna on February 24th 1905, came to Frankfurt as a small girl together with her parents, Heinrich Hiebel a gild master and his wife Anna as well as her older sister. In the mid-1910s she is schooled at the children’s ballet of the Frankfurt Opera House, where she quickly makes her first dance appearances. In Trude Hesterberg’s cabaret "Die wilde Bühne" ("The Wild Stage") in 1921, she performs her own improvisations. In the following years she dances in the revues of Hermann Haller and Erik Charell and her performances can now be seen in Berlin, Vienna, Paris and London.

Her first appearance on screen is in the "Wege zu Kraft und Schönheit", 1924/25 ("Ways to Strength and Beauty"), which celebrates the cult of the body. Friedrich Zelnik subsequently engages her for the Deutsche Film Union (Defu), where she participates in numerous film productions, including "Thérèse Raquin" and "Ritter der Nacht" ("Knights of the Night").

In 1934, La Jana goes on an extended revue tour travelling through England and Scotland. Starting with the films "Truxa" and "Es leuchten die Sterne" ("The Stars Shine") by Hans H. Zerlett, she performs from 1936 onwards in a series of films made in Germany which transform her into a star. She attains wide success especially when performing in exotic roles like in "Der Tiger von Eschnapur", 1937 ("The Tiger of Eschnapur") or "Das indische Grabmal", 1937 ("The Indian Tomb"). Indeed, although typifying the embodiment of the "non-ayran" woman, which clearly contradicted the ideal vision of womanliness of the Dritten Reich, she became for this same very reason the ideal projection of all the various desires of the public.

La Jana did not live to see the premiere of her last film "Stern von Rio" ("The Star of Rio"). After completing a tour for the troops of the German Wehrmacht, she dies of pneumonia on the 13th of March, 1940.