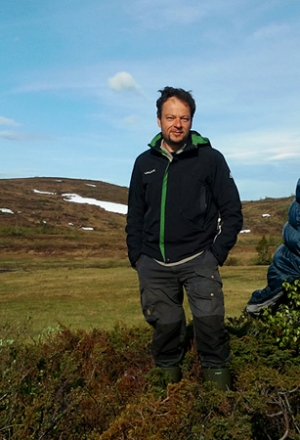 Jan Michael Haft, born 1967 in Munich, had the desire to deal professionally with nature issues as a child already by his own account. At the age of twelve, he made his first Super8 film about his snakes. He studied geology, palaeontology and biology in Munich and Würzburg and in the early 1990s he began working as an assistant for animal film productions. Until 1995 he accompanied nature filmmakers such as Wieland Lippoldmüller (above water) and Walter Sigl (under water) on often several-month filming trips.

In 1996 Jan Haft founded his own production company nautilusTV, which became nautilusfilm GmbH in 2001. Since then he has been producing numerous nature documentaries, initially exclusively for television. For example, several episodes of the series "Expeditionen ins Tierreich" (2003-2006) and the documentaries "Deutschlands älteste Bäume" (2007), "Der Esel - Vom Wüstentier zum Weggefährten" (2008) and "Das Kornfeld - Dschungel für einen Sommer" (2010). Haft also made the region of the Upper Bavarian Isental, where he lives, the subject of his work several times. With "Wildes Skandinavien - Norwegen" (2011) and " Wildes Skandinavien - Dänemark" (2011) he also produced documentaries on areas outside Germany.  Numerous directorial works and productions by Haft have been awarded prizes at national and international nature film festivals. His TV two-parter "Mythos Wald" (2008) won the Grand Prix at the Mountain and Adventure Film Festival in Graz, Austria and received the award for Best Camera at the two most important nature film festivals in the world, the Jackson Hole Wildlife Film Festival in the USA and the Wildscreen Festival in England.

Haft's films are characterized by a special aesthetic and the use of unusual techniques. In a portrait of the German public broadcasting service NDR about his style it was said: "Slow motion and time-lapse, macro shots and a moving camera let us discover processes usually barely visible to the eye and help uncover hidden connections. His films allow the viewer to immerse deeply in a seemingly familiar world and discover it in a completely new way. Not only are new optical highlights constantly offered to the eye, but assumed facts are also called into question again."

Jan Haft's feature film debut was "Das grüne Wunder - Unser Wald" ("The Green Planet", 2012), which took several years to shoot. Further feature films were "Die Nordsee - Unser Meer" ("Secrets of the North Sea", 2013) and "Magie der Moore" (2015), both of which were also made over periods of several years. Haft then also produced numerous TV documentaries and reports again, such as "Wilder Rhein" (2013), "Wilde Slowakei" ("Wild Slovakia", 2015), "Kinder der Sonne: Unsere Schmetterlinge" (2016) and several episodes of the documentary series "Universum" (2014-2017). He is also the producer of many other TV documentaries.

Haft's next feature film "Die Wiese - Ein Paradies nebenan" was released in April 2019. In the film he showed in his typical, immersive style the diverse flora and fauna of German wild meadows.