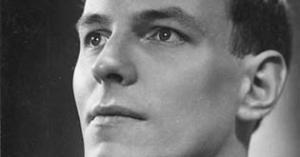 Horst Joachim Arthur Caspar was born January 20, 1913, in Radegast as the son of a former officer. He studied acting in Berlin, where his teachers were Ilka Grüning and Lucie Höflich.

Being from Jewish descend, he needed a special permission to perform on stage during the Nazi regime. However, this did not stop him from starting a big career. In 1933, he was engaged by the Bochumer Stadttheater, and in 1938, he moved to the Munich Kammerspiele. Caspar usually played adolescent heroes in classic plays such as "Faust" and "Hamlet". In 1940, he moved to the Schillertheater in Berlin, where he stayed until 1944 when the theater was closed as a result of the war. In the same year, he married his acting colleague Antje Weisgerber.

After the war, Caspar joined the ensemble of the Düsseldorfer Schauspielhaus. Furthermore, he played the leading role in the Goethe adaptation "Begegnung mit Werther" (1949, directed by Karl Heinz Stroux). In Helmut Käutner"s thriller movie "Epilog" (1950) he portrayed a reporter who wants to solve the reasons behind a ship disaster.