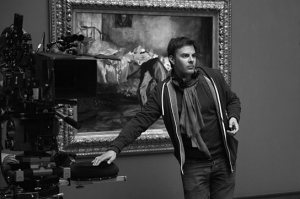 François Ozon was born on November 15th, 1967 in Paris, where he studied directing at the prestigious film academy La fémis. Ozon started out with award-winning short-films before he released his first feature-length film "Sitcom", a dark family comedy, in 1998.

The love tragedy "Gouttes d’eau sur pierres brûlantes" ("Water Drops on Burning Rocks", FR 2000), which is based on a play by Rainer Werner Fassbinder, premiered at the Berlinale in 2000 and received rave reviews. His third film "Sous le sable" ("Under the Sand", FR 2000), about a woman who cannot get over her husband's death, won a César for "Best Film" and was nominated for "Best Direction".

In 2002, "8 Femmes" ("8 Women", FR 2002) premiered at the Berlinale. It is a musical comedy starring well-known French actresses, including Catherine Deneuve, Isabelle Huppert, Emmanuelle Béart, Danielle Darrieux und Fanny Ardant. After this project, Ozon began to focus on drama. In "Swimming Pool" (FR 2003), Charlotte Rampling plays a British mystery author who stays at her publisher's home in the country-side of France and develops an unusual relationship with his daughter. "5x2" (FR 2004) tells the story of a marriage in five chapters – and in reverse chronology.

Ozon's "Potiche" ("Das Schmückstück", FR 2010) premiered at the Venice Film Festival in 2010 and was nominated for numerous international film awards as well as the Césars for "Best actress in a leading role" (Catherine Deneuve), "Best actress in a supporting role" (Karin Viard), "Best adapted screenplay" and "Best Costumes". Following this success, Ozon made "Dans la maison" ("In the house", FR 2012), a thriller about the fatal relationship between a teacher and his literary-gifted student. The film received the first prize at the Film Festival in San Sebastián.

With "Jeune & Jolie" (Young & Beautiful", FR 2013), Ozon made a provocative film about a 17-year old student who works secretly as a prostitute, in "Une nouvelle amie" ("The new Girl-friend", FR/DE 2014) a young woman takes care of the husband and child of her late best friend.

Ozon's most recent film, the French-German co-production "Frantz" (2016), is a melodrama about a Frenchman who comes to a German village shortly after World War I to visit the grave of a German soldier with whom he had a mysterious relationship. "Frantz" celebrated its world premiere at the Venice Film Festival and opened in German cinemas in September 2016.