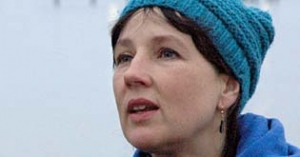 Elke Hauck, born 1967 in the Saxon town of Riesa, finished an apprenticeship as a bookbinder and took evening courses at Dresden"s Hochschule der Bildenden Künste. Hauck then studied German philology and art pedagogics in Leipzig and Versailles (France). In 1994, she enrolled in the directing class at Deutsche Film- und Fernsehakademie (dffb) in Berlin and graduated from dffb in 2002. Hauck"s graduation film, the documentary film "Flügge" about the aspirations of East German teenagers, was shown in the ZDF series "Das kleine Fernsehspiel". In 2007, Hauck made her feature film debut, the drama "Karger" which won the award bestowed by the Prime Minister of the Saarland at the 2007 Film Festival "Max Ophuels Preis".