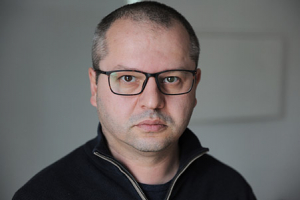 Corneliu Porumboiu was born on 14 September 1975 in Vaslui, Romania. From 1994 to 1998 he studied management in Bucharest, followed by studies in directing at the National University of Theatre and Film Arts 'Ion Luca Caragiale' (1999-2003), also in Bucharest. His feature film debut, the satirical tragicomedy "A fost sau n-a fost? ("12:08 East of Bucharest", RO 2006), was awarded prizes at numerous festivals: among others in Cannes (section Quinzaine des Réalisateurs) with the Caméra d'Or and the Europa Cinemas Label.

The crime drama "Politist, adjective" ("Police, Adjective", RO 2009) has also won numerous awards. In the section Un Certain Regard of the Cannes Film Festival he won the Jury Prize and the FIPRESCI Prize.  Porumboius' documentary "Al doilea joc" ("The Secod Game", RO 2014) was about a snowy soccer game in which his own father acted as referee. The comedy "Comoara" ("The Treasure", RO/FR 2015), about the bizarre treasure hunt of a family father, once again won several festival prizes, including in Athens, Cairo and Transylvania.

In the Cannes 2019 Competition, Porumboiu, who has long been considered one of the most important directors of the new Romanian cinema, presented the comedy of villains "La Gomera". The Romanian-French-German co-production tells the story of a corrupt policeman who wants to get a mafia boss out of prison on the island of La Gomera. The German theatrical release was in February 2020.