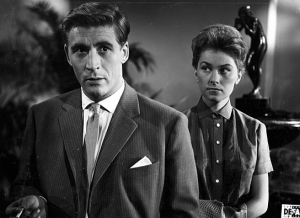 Christine Laszar was born December 19, 1931, in the East Prussian village of Ortelsburg (now Szczytbo, Poland). After finishing school, she attended actor's training in West Berlin and then performed at Berlin's Renaissance-Theater, at the West Berlin political satire revue "Die Stachelschweine", and at Munich’s "Schaubude".

Director Erich Engel then discovered the young actress in Munich and gave her a role in "Geschwader Fledermaus" (1958), an anti-war movie about the colonial conflict in Indochina and Vietnam"s liberation attempts. The leading female role of secretary Flessy landed Christine Laszar a permanent position at DEFA, and Laszar moved to the GDR in 1958. In the GDR, she made a name in numerous crime and spy films and thus became one of the most popular DEFA actresses of the 1960s.

In "Weißes Blut" (1959), directed by Gottfried Kolditz, Laszar played the wife of a young Bundeswehr officer who falls severely ill after being heavily contaminated with radiation in a nuclear bomb test. The couple then goes public with his story and criticizes the nuclear armament. In "Der Tod hat ein Gesicht" (1961), directed by Joachim Hasler, Laszar again showed strength of character as a young chemist who advocates banning a dangerous poison. In Johannes Knittel's "Der Arzt von Bothenow" (1961), Laszar was seen alongside Otto Mellies as his spoiled and arduous wife.

Although Laszar celebrated great success during the early 1960s, her movie career came to a standstill towards the end of the decade, and from then on, Laszar was mainly seen in TV productions, for instance in "Tod im Preis inbegriffen" (1968) and in "Krupp und Krause" (1969). In the following decade, she withdrew from acting and became a TV editor for DFF. In this position, she made several artist portrays.

During the 1980s, Christine Laszar withdrew from public life after suffering from an illness.