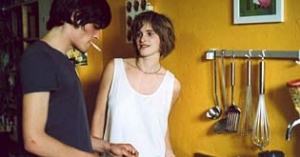 Twenty-six year old Dejan fled to Germany from battle-torn Bosnia. Although he has lived as a refugee in Cologne for many years, troubling visions from the past continue to haunt him. Three of his friends from the time of the war visit him in vivid hallucinations. Dejan can′t shake off his "Yugotrip", not even when he falls in love with the young German girl Anna.