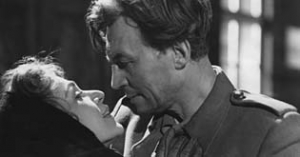 Berlin, 1936. Athletes and visitors from all over the world have come to the city to take part in the Olympic Games. Anti-Fascists use the opportunity to tell the foreign guests about the situation in Germany by distributing leaflets. Being cornered by the Gestapo, the wounded resistance fighter Jakob manages to go into hiding with the help of the Swiss doctor Thea. They fall in love with each other and when Jakob joins the International Brigades in Spain to fight against Franco, Thea follows him and becomes a dedicated fighter against Fascism. The enduring battle, however, keeps preventing them from becoming a real couple. After being captured by the Fascists, they both end up in a detention center. Thea is deported to Switzerland - but she will wait for Jakob.