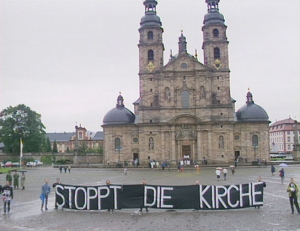 Welcome to the Dome

A rare record of the German Act-Up (Aids Coalition to Unleash Power) movement. At the closing prayer of the German Bishops' Conference on 26 September 1991, the Frankfurt action group came together in a spectacular protest to demonstrate against the Catholic Church's - and in particular Fulda cathedral's Archbishop Johannes Dyba's - discrimination of HIV-positive people and AIDS patients. The protest made it onto Germany's nationwide 8 pm news show, the "Tagesschau", marking the first time that the concerns of AIDS activists had ever been reported on the programme. Jochen Hick recorded the events. This short documentary is a prime example of the filmmaker's untiring commitment to capturing on film queer activist history for future generations.