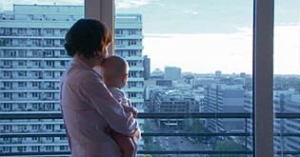 Lullabies are our first connection to the world – a universal experience we all share, yet it remains deeply personal. "Can you recall a song that your mother would sing for you to fall asleep?" is the question Tamara Trampe and Johann Feindt ask people they meet in the streets of Berlin.

A simple question. Some start singing, others smile, one person begins to cry. The memory of the mother, of childhood opens the door to people′s stories. Stories of warm shelter, loneliness and exclusion, home and abroad. Fragments of melodies, a few sentences, a song, sometimes a whole life story.

Sign language is the mother tongue of composer Helmut Oehring. No one could ever sing any lullabies to him, so he remained a stranger in the world of those who speak. Music became his gateway to this world.

Detlef Jablonski was born in prison and grew up in a foster family. His entire life was marked by the yearning for his mother. And while life never stopped being a struggle he was sometimes defeated, sometimes he won.

Santos grew up in institutional care, did his time in prison and now puts all his hope on a future spent with his son. He screams out his love for him in a breathless piece of rap music.

Apti Bisultanov, former vice premiere and beloved poet in his home country Chechnya, now lives in his Berlin exile. The only personal object in his sparsely furnished home is a lucky charm, a daisy bird. It reminds him that he, too, was once a child, pure and happy.

Last but not least there is Mila, the child. She guides us back to the questions we once asked, back to our dreams.