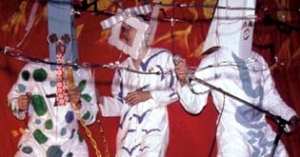 For his bestseller "Verschwende Deine Jugend" ("Waste Your Youth"), Jürgen Teipel interviewed around a hundred protagonists of the German Punk and New Wave scene over the course of three years. He spoke with such bands as Deutsch-Amerikanische-Freundschaft (DAF), Palais Schaumburg, Fehlfarben, Der Plan, Die Krupps and Einstürzende Neubauten, with people like Ben Becker or Markus Oehlen, whose artistic development was strongly influenced by punk, as well as with such writers as Thomas Meinecke and Peter Glaser. All this testimony was fused together into a novel-like text that was seen as nothing less than the history of a whole generation – polyphonic, multi-perspectivistic and with innumerable stories about the scene.

For the film version "Waste your youth.doc" Jürgen Teipel and media computer expert Sigrid Harder took up this approach. Corresponding to the punk do-it-yourself method, they copied the sound from the interviews and scanned more than 400 original pictures, many of which were dug up in attics or cellars, into the computer, and the result is a one-and-a-half hour long epic which in its very rawness, permeated by background noise, tells a whole lot about the completely casual atmosphere in which the talks took place.

A rhythm comes up, a scratchiness, a roar, a motion that makes it physically possible to imagine how an intrinsic German-language pop culture could develop out of this punk explosion in 1977 – only in the end to be rediscovered by subsequent generations and to become a part of pop culture we would not want to do without.