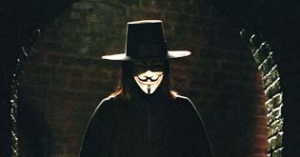 Written by brothers Andy and Larry Wachowski, who gained a name for themselves for their "Matrix" trilogy, the screenplay for this dark science fiction drama is based on a graphic novel written in the 1980s by British comics writer Alan Moore (of "From Hell" fame).

Like the much-vaunted original which, in turn, was loosely based on George Orwell’s "1984", the film is set in futuristic Britain, which is now ruled by a totalitarian government. After the end of a nuclear war the country is taken over by a fascist regime. Foreigners, homosexuals and all political opposition has been murdered in concentration camps. Several men are about to rape young Evey when a masked figure intervenes, saving her from this lifethreatening situation.

The man – known only by the pseudonym "V" – takes her to his secret hideout, from whence this radical anarchist commits all kinds of acts of terrorism and sabotage in an attempt to topple the authoritarian regime.

This anonymous warrior makes use of his disarming charisma, unbeatable proficiency in martial arts and clever razzle-dazzle tactics to instigate a revolution against the police state, exhorting his fellow-citizens to overthrow their tyrannical and oppressive government.

When Evey discovers her masked crusader’s real identity she also learns the truth about her own past and even becomes, unbelievably, his comrade-inarms at a decisive point in his plans. Together they take up the fight for freedom and justice in a land bound and gagged by cruelty and corruption.