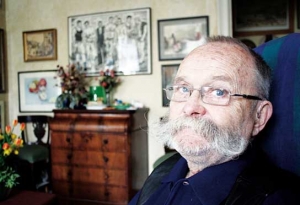 "Among Men - Gay in East Germany" addresses the question of how gay men lived and could live their lives under ‘real socialism’, where GDR ideology considered homosexuality to be a remnant of bourgeois decadent morality and harmful to a socialist society. In this documentary we meet six men who talk openly about their social and intimate experiences, some for the first time, and get to know several individuals who could hardly be more diverse, or more contradictory. At one end of the scale is Frank Schäfer, a barber and a shrewd and resourceful individualist; at the other, Eduard Stapel, an academic theologist who founded a GDR-wide network of homosexual associations and upon whom the Stasi firmly set its sights. Even though homosexuality had not been punished since the 1950s, the conspiracy of silence, the condemnation, the pressure to conform to society and to sexual discretion remained. "Among Men" introduces us to a number of strong and – for all their pain – spirited men who were obliged to come to terms with their homosexuality alone, each with their own very different strategies for survival and adjustment.