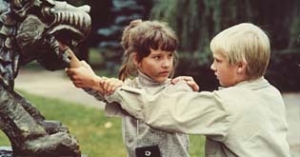 11-year old Lena is on her first trip to a vacation camp. Already on the trip to the camp, she develops a crush for the older Wolfgang, and in the following days they become deeply acquainted with each other. But soon, problems arise that put their friendship to a hard test. Precocious Antonia has cast an eye on the good-looking Wolfgang; furthermore housemaster Eichler and teacher Busse disapprove of the relationship of their pupils. To prevent that both children spend too much time with each other, they are put into different groups. Thus, Lena becomes angry with the housemaster. The conflict escalates, and after a disco event, Lena suddenly disappears. Every attempt to find Lena fails until Wolfgang remembers where Lena might be hiding. He starts to look for her and brings her back to the camp.