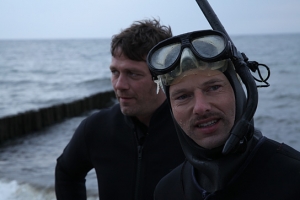 Documentary on the 1974 escape of Erhard Schelter from East Germany. Together with another swimmer, he secretly crossed the sea from Boltenhagen towards West-Germany. Their destination was Dahme, which was about 30 kilometres away and which had a lighthouse providing orientation at night. At the break of dawn, they were spotted by a East-German boarder patrol boat, but virtually in the last minute they were saved by a West-German ferry. In the film, which employs historical footage as well as dramatic re-enactments, Schelter himself speaks about the night, and the events and motivations leading him to the escape attempt.