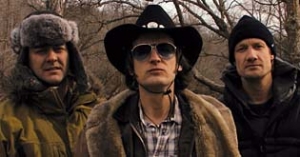 What would you think if you were to see a man in a taxi in his late thirties singing his head off in broken English? And what would you think if he were being filmed by two men in fur caps who also joined in the chorus? And would you believe these three best mates if they were to tell you that they have decided to become famous? Would you perhaps tell them that the days of their boy group, "The Berlin Brothers" are numbered and they would do best to forget about the whole thing? Get a grip? Just chill out a bit? After all, they′re pushing 40, aren′t they?

Yes, you would. But Johannes Selinger, Mattias Welblinger and Christian Hannawald stopped listening to good advice long ago. And now they′re already on a plane to America – on the way to dreaming their big dream of immortal fame. OK, go ahead and fly, you′d say. It won′t work out anyway. But what if, a few months later, you pick up a newspaper and read a report about a certain John Salinger and the "Berlin Brothers" whose song, "The Best Time of My Life", had made it to number one of the US charts? Wouldn′t you shake your head in disbelief and think – no, it can′t be them, never! Wouldn′t your jaw just drop if, while you were innocently watching the goggle-box one day, you′d catch sight of the trio relaxing in Florida, each with a blonde on their arm?

Wouldn′t you just jump out of your breakfast chair spilling your coffee, and stare, flabbergasted at the huge newspaper photo of John Salinger – as he now calls himself – standing and smiling in the midst of the prairie, with just one arm? Yes, you would. And you′d also want to know: now what was the idea again?