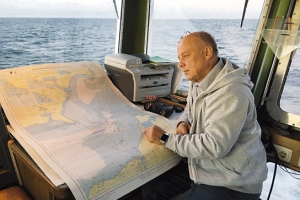 Documentary film about the nature and the people in different regions on the Baltic Sea. Volker Koepp travels to the island of Usedom, to the beaches of Poland, to the Baltic coasts and to the northern archipelago of Sweden. However, he does not portray the region as a holiday destination, but rather shows it as the home of a wide variety of people: Fishermen, scientists, sailors and young people in search of a perspective talk about their very personal view of the sea. The political conflicts between East and West, regional egoisms and ecological problems are also reflected in the history and present of the Baltic Sea. In addition, the sea is shown as an impressive natural spectacle, which always presents itself differently depending on the season.