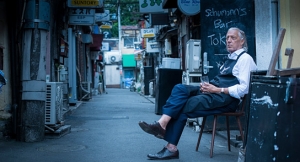 Charles Schumann is the man behind Schumann’s - a writer, model, thinker and traveller in all things to do with bars. At 75 he appears to have seen and done it all: the man from Lower Bavaria first worked as a border guard, later gained experience in discos and bars in southern France before finally opening Schumann’s American Bar in Munich in 1982. Now he is exactly the right age to go, in "Schumann's Bar Talks", on a perambulation through some of the most interesting bars in the world, including the Dead Rabbit in New York, the Hemingway Bar in Paris, El Floridita in Havana and the High Five bar in Tokyo. He explores the secrets of bar culture, meets bar proprietors, the hearts and souls of bars and their chroniclers.

During these conversations we begin to realise that each bar is its own small universe which is brought to life every single day in a different way. The clientele changes with the time of day and day of the week but the permanent staff make the place. And so "Schumann's Bar Talks" is not only a voyage of discovery to the most beautiful bars in the world, but also to the people who bring them to life.