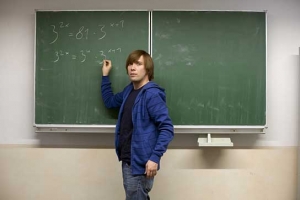 Comedy in so-called "Reality"-fashion: Lead actor Christian Ulmen slips into the role of 18-year old pupil Jonas, who has failed his classes several times. The allegedly hopeless case gets a last chance at a school in a small town in eastern Germany. During his six-week trial period at the new school, Jonas' daily routine is recorded by a documentary film-team. Neither his schoolmates nor his teachers seem to know about his real identity.