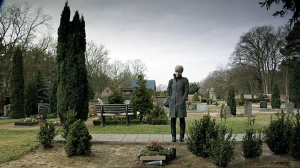 Documentary on Jewish siblings Michla und Feiv'ke Schwarz. At a young age, both survived the Holocaust and planned to reunite in the Polish town of Lodz. But when their meeting didn't take place, each of them thought that the other had died. In this tragic belief, their ways separated forever. While Michla started a family in Israel, her brother Feiv'ke moved to Germany – and of all places, he settled in the town where he was previously held captive in a concentration camp. There he changed his name and eventually married a German woman.

Decades later, Michlas granddaughter – who has relocated to Berlin – finds hints which eventually lead her to her great-uncle's story. Alas, the two siblings could not be reunited, for Feiv'ke passed away in 1987 and Michla died in 2001. Nevertheless, the granddaughter continues her research by visiting the town where her great-uncle lived and interviewing friends and relatives.