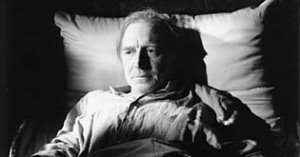 Against his will, Hölderlin is committed to a clinic. Seven months later, he is diagnosed as incurably demented and released. He spends the next 36 years in the care of carpenter Ernst Zimmer, while still writing poems under the name "Scardanelli".