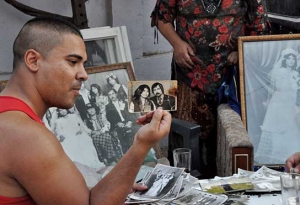 In 1992, two men were shot in a field near the German-Polish border. The circumstances which led to the death of Grigore Velcu and Eudache Calderar have not been clarified even today. According to official reports, they were victims of a hunting accident, a tragic mix-up over wild boar. The hunters were never convicted, as the protracted trial failed to pursue many of the most decisive questions and eventually ended in an acquittal.

Nearly 20 years later, Philip Scheffner carries out the painstaking investigation that never took place back then. He seeks out the dead men’s relatives in Romania and records the statements they were unable to give until now. As with the other witnesses and different experts he returns to question, he gives them the opportunity to listen to their own statements and reassess them as necessary – unlike standard practice, which elevates statements to fact the very moment they are made. In this way, Scheffner performs a cinematic revision of the case and the medium simultaneously. His diligent handling of material and reports creates a web of landscapes, recollections, case files and German political sentiment all of an increasingly oppressive complexity.