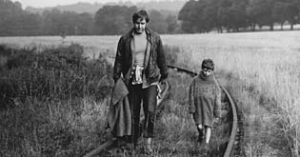 Two years ago, cinema poster painter Jonathan had agreed in his divorce to leave the sole custody for his son David to David′s mother Ruth. But at the boy′s ninth birthday, Jonathan all of a sudden returns to their house. In the meantime, Ruth has found a new Partner, Franz, whom David has accepted as his surrogate father. Although everybody tries to solve the new situation with a lot of tolerance, Franz and Jonathan become rivals. But this rivalry comes to an end when David has an accident. Now, the boy is allowed to visit his father Jonathan on the weekend whenever he wants to. But before that, David goes on one last adventure: On a trip to a vacation camp, Jonathan "kidnaps" his son to spend several days hitchhiking alone with his son. Then, he gets him back to the vacation camp.