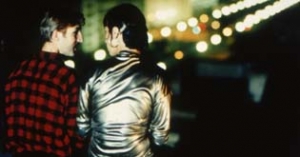 Construction worker Alex is a loser. The failed family man has been living for months in a container on the building site. Ruth has been on the game for some time, a victim of the ′Wende′ who still dreams of ′a normal life′. Finally, Svetlana is a refuge from Bosnia who is soon to be deported.

Alex meets her on the in Berlin′s Kurfuerstenstrasse. Three lonely people who want to change their lives, whose greatest obstacle on the path to self-improvement is as much themselves as the circumstances.
"Break Even arose from a five-week character development phase with the actors. Dialogues were never written down and the shoot had a distinctly documentary nature. The ′from the hip′ style camerawork and jump-cut editing give the film a dynamic pace which stands in interesting contrast to the simple storyline and precise concentration on the characters" Eoin Moore.