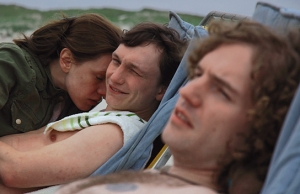 Deserted, the red brick house stands in the barren coast area. For the first time since the funeral of his father, Marten returns to his old family home. There he waits for his brother Volker, whom he also hasn't seen in years. Marten wants Volker to accompany him when he goes to pick up their mother, who has been in prison since the death of their father and is soon to be released.

Yet apparently, reclusive Volker has only come to sell the house. The joy of seeing each other again can't hide the tension between the brothers for long. Marten still feels guilty for being fearful and not more supportive to Volker, who had to suffer most from their choleric father. Thus, the days they spend together in their childhood home become an emotional challenge for both.