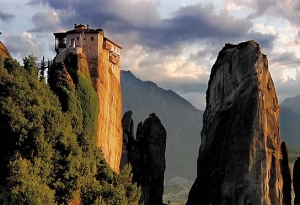 The legendary Metéora monastery complex in Thessaly is perched on top of imposing sandstone rock pillars. This film tells the story of two of the monasteries’ inhabitants. Theodoros, a Greek monk, lives in spiritual solitude; his existence is a constant round of chanting and ritual. The retreat on top the rock that faces this monastery is so inaccessible that the Russian orthodox nun who lives there has to be let down in a net to the ground below.
Torn between his spiritual calling and the simple peasant life in the village that lies at the foot of Metéora, Theodoros feels drawn towards the nun. The film’s director unfolds this tender love story sparsely, as if it were pious poem. The two begin to meet more frequently – their love contradicting monastery life. This film, which contains almost no dialogue, is a literal take on the heavenly power of love to which all must defer. A film that encapsulates life’s fundamental choices: despair and give up or accept love as divine fate.