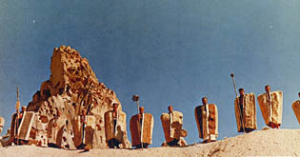 Pier Paolo Pasolini's film adaptation of the saga of Jason, Medea and the search for the Golden Fleece: The 20-year-old king's son Jason sets out to bring his uncle Pelias to justice, who has illegally seized the throne of Jolkos. Pelias, however, is only willing to release the throne if Jason brings him the mythical Golden Fleece, which is kept in a temple in the kingdom of the Colchians. On his perilous journey to Colchis, Jason meets the mysterious Medea, whose fate is fatally intertwined with that of Jason.