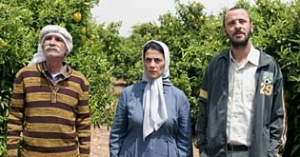 Salma Zidane lives in a tiny Palestinian village on the West Bank. She is 45 years old and a widow. Her children have left home, and she is alone. When the Israeli minister of defence builds a house on the other side of the green line, Selma′s lemon trees come to the attention of his bodyguards. Her trees are a security risk. They can hide terrorists and impede the bodyguards in their work. In any case, these Palestinian lemon trees simply get in the way of the powerful Minister′s superior security needs.

The lemon trees were planted by Salma′s family many generations ago – they are synonymous with Salma′s family history. Salma gets herself a lawyer. But Ziad Daud is up against a battery of clever military lawyers, all of whom are covered by the top brass. It′s an unfair battle, that isn′t made any easier when the 45-yearold widow falls in love with her lawyer, a divorcee ten years her junior – a scandal as far as her Palestinian neighbours are concerned. On the other side of the grove, Salma′s struggle to keep her trees has not gone unnoticed. The defence minister′s wife, who has become more and more lonely and unhappy as her husband′s political career has blossomed, feels increasingly drawn to Salma as the unfair battle between her husband and their Palestinian neighbours drags on. An invisible bond connects these two very different women who find themselves on the brink of a new phase in their lives.