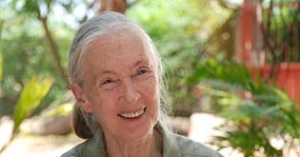 More than twenty years ago, Dr. Jane Goodall, now 76, decided to give up her career as a primatologist, as well as her private life, in order to devote her entire energy to saving our en dangered planet. Since then she’s been spending 300 days per year traveling around the globe spreading hope for future generations by giving lectures, writing books and through her youth organization ’Roots & Shoots’, active in more than 100 countries worldwide.

From her childhood home in Bournemouth/England, we travel with her to the Gombe National Park on the shores of Lake Tanganyika, in Tanzania, her second home. Here is where she began her groundbreaking research nearly half a century ago, and where she returns every year to enjoy the company of the chimpanzees that made her famous. We accompany her on her journey across several continents and learn about her exciting past. Featuring tributes and comments by people who are very close to her, and film material from her years at Gombe, Jane’s Journey is a portrait of the private person behind the world-famous icon.

It is the story of an exceptional woman, possibly the most fascinating woman of our time. With its unhurried pace and unobtrusive camera, this documentary shows the charismatic and eloquent Jane Goodall as she has never been seen before. Intimate conversations with Goodall alternate with spectacular footage of her and her beloved chimpanzees as well as revealing comments by her son, her colleagues and even Hollywood celebrities. The definitive film on the ardent advocate for the protection of the earth!