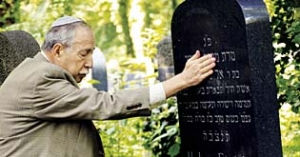 In the north of Berlin, tucked away in a residential area surrounded by walls, there is a jungle of trees, rhododendrons and ivy. In between the rampant foliage are thousands of stones – large and small, some artistic-looking, others simple, some magnificent and crumbling; some nameless and others with indecipherable inscriptions.

Weißensee is the largest Jewish cemetery still in use in Europe. It is so large that it could contain approximately eighty-six football pitches. Walking through the cemetery is like taking a walk through history and the list of famous artists, philosophers, lawyers, architects, doctors, teachers of religion and publishers who are buried here is long indeed. Not many are aware that in a few years’ time, this protected area will officially be listed as one of UNESCO’s world heritage sites.

Weißensee is like a fairy-tale forest, a history book, or a jungle in the heart of the German capital; but above all, Weißensee is a place full of life, where the members of extended families from Argentina come in search of their ancestors’ graves. Elsewhere in the cemetery, restorers are busy painting sparkly Stars of David on tombs, while a slight gentleman in the registry hands a bus load of exiles documents about their relatives’ graves; an ornithologist specialising in birds of prey records the number of young goshawks, and an octogenarian tells us that this is where he once fell in love with a girl in his class at school. Right here, during a games lesson in field number A8, where colourful Russian graves stand today.

The Jewish Cemetery at Weißensee is now 130 years old. It has never been closed and as such represents one of the few institutions in Germany that were to remain in Jewish hands under the Nazis. The most astonishing thing of all is: neither the cemetery nor its archive was ever destroyed – making it a real find for collectors of stories.