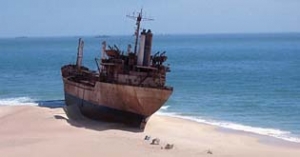 Viewed from above, the Sahara is oddly gentle; the small sand hills, chains of dunes, dried out wadis and sand ripples all lend the desert their special charm. An unbroken yellow surface that occasionally segues into brownish and sometimes shines blazing yellow, it is impossible to remain unaffected by its beguiling beauty. Africa begins directly behind it – or in front of it, depending on the direction one comes from. Hotel Sahara is a film journey to the last invisible border from the West-African coast to Europe: Nouadhibou, Mauritania.

"Hotel Sahara" is a metaphor, a point of arrival, of departure, of broken dreams. A melting pot. A place of gathering, of right and wrong recitals, of split personalities. It is, above all, a no-man’s land, a place of endless waiting, and endless hoping. In the beginning Nouadhibou looks like any other West African city, but entering the colorful lives of the people who live there, we discover what it means to be on transit, on the road, stuck in a desert city next to the Atlantic Ocean, between hope and despair, between homelessness and the search for a home. "Hotel Sahara" offers a new perspective on the actual situation of migrants attempting a new life in "the North".