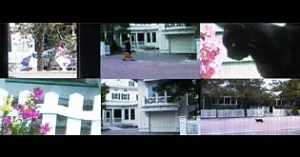 Although Janis lived in Seaside for the past 20 years and most of the inhabitants have heard her name, almost nobody has seen her face. Because she resides here, but does not participate in the everyday life of Seaside, Janis calls herself an invisible person.


Since Janis had a terrible accident at the age of 22 she became paralyzed and spent the following decades in bed, leaving her bedroom just one or two times a year – watching the world around her house through a surveillance camera connected to her laptop.


With the camera she can look at all the spots that otherwise would stay concealed – her living room, her kitchen and especially the life outside her house. Since Janis cannot be part of the world that surrounds her, she takes at least a small extract to her own little world.


The film gives an insight into the universe of Janis Sawyer, one of the few permanent residents of Seaside, and looks at her hometown, once the location of the feature film The Truman Show, through her eyes.